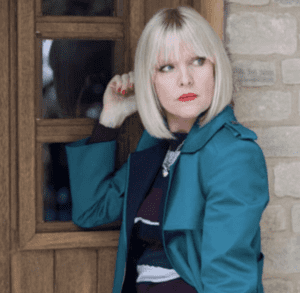 Ashley Jensen, simply put, is a scene-stealer. Whether in Extras, Ugly Betty, Catastrophe or the titular character in Acorn TV’s Agatha Raisin, she’s razor-sharp at delivering comedic dialog and a master of physical comedy. Agatha returns to Acorn for three 90-minute episodic movies airing weekly beginning Monday, February 10. Jensen spilled the tea with Cynopsis about the show’s success in the States and some of her favorite experiences on-set.

Why do you think Agatha Raisin is resonating so strongly in America?

AJ: This may be a bit if a generalization, but the eccentricities of English characters are good on television. We have the posh gentry who only lives in one area of one room of his house because it’s too expensive to heat the rest of it, but he’s actually really tight even though he’s quite rich. And you’ve got the ex-captain of the army who still wears tweed but plays with little figures. Agatha wearing high heels and drinking too much and eating shit foods. This eclectic bunch of characters is part of its charm. And it’s quintessentially English. It’s chocolate-box England with beautiful thatched houses and stately homes.

Sky One dropped the show after its first season, Acorn picked it up and it’s found an entirely new audience.

AJ: That happens a lot now, doesn’t it? A show gets dropped and someone goes, “Really, you’re dropping it?” You’ve got 2 million people going, “We love this,” and half a dozen people in a committee board room going, “No, its not for us.” Sometimes you have to listen to the fans and the people. With Acorn picking it up and extending it to 90 minutes, it’s given us more freedom and confidence. We know what we’re in now. Even in the first season we were still finding out feet, and it was the one-hour format so it was very plot-driven. But we all know the type of show it is now. We’re embracing the innuendo, we’re embracing the camp, we’re embracing the silly and the funny.

Your character is based on a beloved book character. In what ways are you like and not like Agatha?

AJ: She’s so supremely confident, and sometimes doesn’t really give a shit about how other people feel really. I think I’m a bit more worried about other people’s feelings than she is. It’s quite freeing to play a character like that, but if she came into the room I think I’d just let her control the room. I can hold my own, but I’m not competing with that!

AJ: Yeah she is. Even through she has this on-off relationship with James, she’s not defined by having to be in a relationship. She gets caught up in the romance of it, but her real love, her passion, is her work and her ability to be good at it. She doesn’t want children, and is not fazed by that. It’s empowering for women to see women characters like that on television. A lot of TV detectives are alcoholics or OCD… but she’s not really got any real flaws in that way. She’s not damaged goods. And she’s quite likable as well, there’s not that darkness. The whole palette of the program is bright. I don’t know how they make it look like the sun’s shining all the time because it didn’t.

AJ: I grew up watching sitcoms in the ‘70s and I did watch things Laurel and Hardy and Charlie Chaplin and this British guy Frank Spencer, played by Michael Crawford. When we go back to the essence of comedy, it’s clowning. It was very physical. Lately we’ve been governed by script all the time, I don’t know whether it’s my stage background, or not, but I embrace those physical moments, too.

Are those moments improv’d for the most part?

AJ: Most of it is improv’d. For example, I’m thinking of a scene last year where I did this long, physical crawling about on the floor and tumbling backwards. And that was, “Agatha walks into the room and checks it for evidence” [in the script].

It’s a very collaborate space to be in, we’re allowed to play. Everything goes here. And the older I get, I think, I’ve got to get a personal trainer before I start doing this job because I better be seriously fit if I’m going to be throwing myself about. I’m not getting any younger. I feel like I need to be in control of my body to be able to do it.

You worked with Ricky Gervais on Extras and more recently on Netflix series After Life. What have you learned working with him?

AJ: Extras was my first big job. It’s interesting, a lot of people say, “Was that all improvised?” And, no, it was very much scripted, but it just seemed improvised. I learned to try to not laugh in the middle of a scene. When we shot the second season of After Life, and even though it was heavy and we were dealing with grief, and with my role and being an aged parent and someone with Alzheimer’s… on paper these are not funny things. But Ricky being Ricky, he’s extremely uncompromising. He’s got a bit of Agatha in him. He winds me up and he purposefully makes me laugh. Sometimes, especially in Extras, the takes we got through were the simply the ones we literally managed to get through without laughing.

How about a takeaway working with the Catastrophe cast?

AJ: I remember Sharon [Horgan] and I just losing it looking at that poor young actor playing my son when he was naked. Of course it was shot from behind, but that poor guy was only 19 or something, and he did it all in a little cloth thing. Then for the full frontal he had to be naked. And she just got the uncontrollable giggles, and I was meant to be crying in the scene, so I had to try to morph my laughing. I was like, “Sharon, you wrote it, what did you think was going to happen?” And she’s just laughing and laughing… she was brilliant.

A CYNOPSIS MESSAGE FROM FACEBOOK 18-34 year olds are on Facebook Watch. 140 M people around the world come to Watch every day for at least one minute. And of those people who visit daily, they spend an average of 26 min in Watch. Reserve top-tier videos across Facebook and Facebook […]

Friday September 25, 2020 While the pandemic has changed media consumption around every aspect of everyday lives, one of the most dramatic changes in sports has been the ability to migrate to a digital-first environment in lieu of actually attending games. The disruption of how we are consuming and experiencing sports, offers new opportunities […]

SOCIAL MEDIA ASSOC PRODUCERJUMA ENTERTAINMENTRemote Looking for creative and highly motivated individual to access and clear videos for network prime time clip series. Must possess a love of TikTok, Instagram, Twitter and Facebook, and be able to navigate platforms. Full info HERE Sunday September 27, 2020 Two-thirds of respondents to the […]