The SeeHer Gender Equality Measure (GEM®) pioneered the quantitative measurement of gender bias, and CBS has 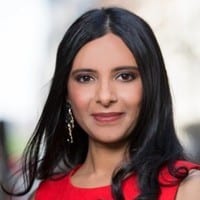 been at the forefront of programming inclusiveness since the network started using the methodology for program research in 2018. In 2020, CBS adapted GEM® to develop a Black, Indigenous, and People of Color (BIPOC) metric assessing the value of racial representation in people’s content choices.

In this week’s blog, Subramanyam talks about how CBS uses GEM® and what the company has learned from being first movers in diversity and inclusion.

In 2022, America looks like my multiracial family. My children are very fluid about gender identity, sexuality, and race. A lot of the descriptors we use — man, woman, straight, gay, Black, Brown, White — don’t work for their generation. And, of course, I want to see my children represented on screen in the truest way.

It’s not just the kids, either. Media and advertising have to stay true to how all of us are evolving. The need for authenticity to engage is true for everybody.

GEM® gives us the ability to measure every show we air, every pilot we produce, and all our promotions. Ongoing empirical evidence shows that doing good and doing good business are not mutually exclusive, reason enough for CBS to embrace gender equality and to do so consistently, with everything. We also benefitted from the pioneering efforts of female leaders like JoAnn Ross, our iconic president of ad sales, who shared her personal passion for change with the entire industry.

Fully human characters make for great television (and ads). GEM® provides insights and direction to create well-rounded, complicated women who are not necessarily good or bad, but fully express their humanity, diversity, and complexity.

We don’t just use GEM® as a scorecard. We don’t just look for up or down, good or bad. We use the data practically to see if our character development is truthful and complex. It also helps us stay authentic when we cut down our 60-second spots to 15 or 30 seconds.

At CBS, we make very diverse programming that represents the whole country, and our teams are also very diverse. One employee in particular, a person of color, really pushed me in early 2020 to respond to what was going on in the country at the time. So we modified the GEM® question set to measure how BIPOC characters are portrayed in our shows.

The timing was almost prophetic because our effort paralleled the nation’s response to the George Floyd murder, when the whole country started paying attention to social justice issues.

Out of that effort sprang what I believe is a truly pioneering resource: an initiative about disability centered on a database of people with disabilities that we use and share in casting.

Using GEM® proactively keeps us on alert for inadvertent stereotyping. What blind spots are we missing? If we could get more content providers and more advertisers to really think about how to adapt the methodology and make it part of their everyday business, that would be huge. Because if GEM® has taught us anything, it is that you can’t force people to see her. You have to own it.