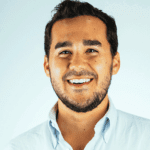 By Dan Greenberg, Co-Founder and President of Sharethrough

“We are not separating from the phone. It’s a part of us. Now, who are you with no phone? What access to information do you have? What you can remember. What’ll you do without your pictures? Are you gonna describe what you saw? That doesn’t work for us. We don’t wanna talk to anybody that doesn’t have a phone. That’s why it’s called an “I” Phone. It’s half myself, half phone. That’s a complete individual.” Jerry Seinfeld, 23 HOURS TO KILL

For the past decade, the industry has referred to the mobile phone as the “second screen” to TV.  Experts celebrated the power of the phone by highlighting emergent behaviors like how people use their phones to look at sports scores while watching a game, to research actors while they watch TV shows, to search for facts while they watch Jeopardy.

How quaint that line of thinking now feels!

Clearly, the phone is not just a tool that enhances TV — it’s now our primary device, our primary connection into the digital world, and it demands our primary attention, even while we watch TV.

As our interdependence with mobile devices in our everyday lives continues to rise, it’s no surprise that they’ve become our primary screen.

In a recent experiment conducted by Sharethrough to research changes in video consumption behavior, the study found 79% of people look at their phone, tablet or computer when a TV commercial starts, not to mention the 86% who just skip the ads altogether. 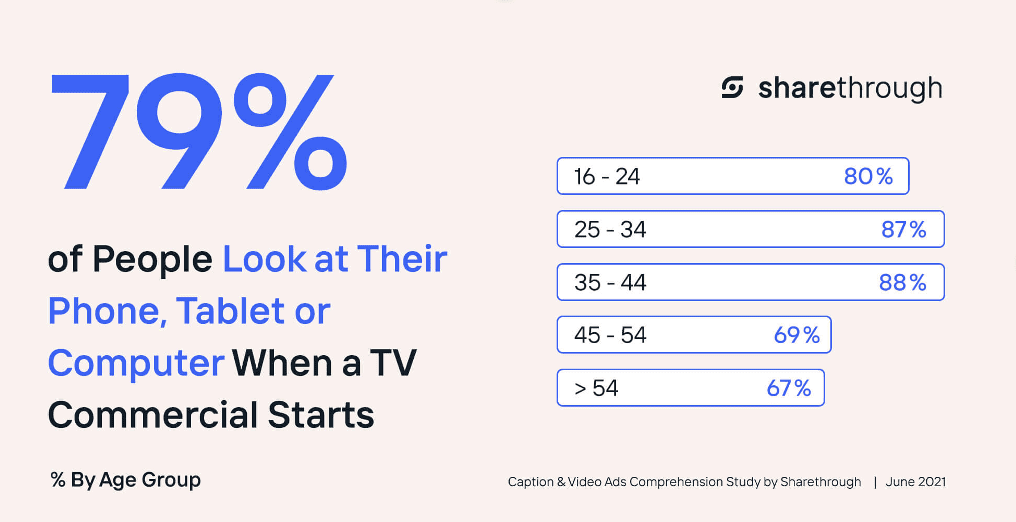 This research shows that a majority of viewers’ primary attention while watching TV is either on social media feeds, text messaging or browsing the web, while the TV plays in the periphery.  Of course some shows defy this dynamic (think “Game of Thrones”, “Ted Lasso”, “This Is Us”), but while watching sports, news, network television and most mindless television, the TV is in fact just a big blurry screen out of view, while the primary focus and attention is on the phone in our hand. 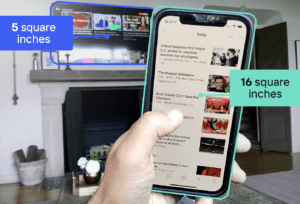 If primary attention is on the phone, what does this mean for advertising?

The phone is already a critical platform for advertisers to reach their audiences, but TV has long been considered the holy grail of attention — Sound on! Huge screen! Captive attention!

But if in fact the primary attention stays with the phone, even while watching TV, this emergent dynamic suggests two changes afoot.

First, this behavior change lends even more power to the phone as a critical device for advertisers.  A modern omnichannel marketing strategy can set up touch points across TV, radio, web, and out of home, but must start and end with the phone.

Second, a modern TV advertising strategy must work within the reality of human behavior.  If even the TV show itself is not the primary focus, then no one can reasonably expect that ads will get primary focus either.

Marketers must adapt to the fact that TV ads are often out of focus, sound off, in the periphery even when they’re not skipped.  And rather than lamenting that reality and yearning for the good old days of interruptive TV and sound-on jingles, proactive marketers will innovate within these new constraints and design TV advertising strategies that take advantage of the peripheral focus and sound-off reality.

Imagine a world where TV ads become like Instagram ads, less like “15-second spots.”  Rather than spots with complex narrative arcs and characters, we’ll begin to see TV ads that look more like slideshows, retargeted product ads, celebrity endorsements, and text-driven highlight reels.  Ads that are to the point, visual, simple, and readable and comprehensible without sound will thrive.

If you squint at most TV ads, the creative strategies are closer to the world of 1950s television than they are to how ads work on the modern internet.

We know the ad on your phone works to drive behavior and action — why shouldn’t the ad on TV follow a similar strategy and design pattern?

With more and more brands planning to allocate more than half of their overall video advertising budget to digital video, it represents a moment for the industry to rethink video advertising.

Successful marketers and creative teams will embrace this new paradigm and anchor around new design principles for TV advertising.  Instead of designing TV ads from the standpoint of “I have a captive person strapped to the couch, forced to watch my ad….what should my ad be?” marketers must design new creative strategies based on the new reality of “I have a user who is paying attention to their phone while a TV show is on; I have 15 seconds to fill but likely only 2 seconds of fleeting attention….how can I deliver something that transfers meaning and is comprehensible?”

When “TV” no longer means “the Big Screen on the Wall”

Although the research indicates that mobile’s rise equals traditional TV’s decline, as the phone has replaced the TV as the primary screen of choice, all is not lost for the future of TV.   In fact, 35% of digital video ad budget will be allocated to Connected TV in 2021.

And moreso, the transition is already underway to deliver television content everywhere on all screens. Some of the largest apps on the phone are in fact “TV apps” — Netflix, Amazon Prime, HBO Max, YouTube, etc.

To a user, opening YouTube on a phone is as natural as flipping from Instagram to email.  And the ad mode will follow the form factor.

The traditional TV ad model is defunct.  The winners of the next chapter of TV will be the marketers and media companies that embrace reality and design for natural human behavior, not against it.