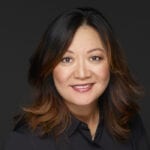 What prompted the decision to expand Sharkfest to five weeks?

We were motivated to expand Sharkfest to five weeks this year because of the great success of last year, when we expanded to a three-week-long Sharkfest, which reached 20 million viewers across National Geographic and Nat Geo WILD, making it the most watched Sharkfest ever in network history. Our audience can’t get enough of sharks! At Nat Geo, we are in the fortunate position to be connected with many scientists and researchers working with sharks, and we knew that we had the platform and audience to create the biggest must-see event of the summer. At the time we planned this summer annual stunt, we had no idea about the impending pandemic, but the increased five weeks are really giving all those at home some beautiful footage and visual escapism. 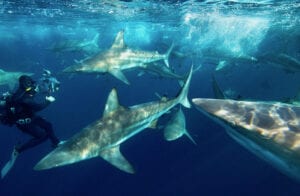 How is SharkFest programming different?

At Nat Geo, we focus on shark-first content that prioritizes science and facts over stunts. With our wide network of scientists, we are able to show that the truth is more thrilling than fiction. And with all this new technology that gets us access into the shark world, like the fin cams and all these other kinds of devices that can film in 4K, we’re able to give audiences a more entertaining, cinematic, almost movie-like experience. For example, in our special Sharkcano, for the first time ever we were able to capture footage of an underwater volcano eruption, thanks to a remote robotic ROV on the surface that captured evidence of sharks living inside a boiling volcanic caldera. And in World’s Biggest Tiger Shark?, Emmy Award-winning cinematographer Andy Casagrande and marine biologist Kori Garza use a range of tools to capture these sharks in ways that don’t disturb them, leading to some incredible discoveries.

What is your personal favorite content this time around?

It’s tough to pick just one special throughout our five weeks; there’s something special about each show. In World’s Biggest Tiger Shark?, from Red Rock Films, two of the world’s foremost shark experts, Emmy Award-winning cinematographer Andy Casagrande and marine biologist Kori Garza, head to a remote lagoon in French Polynesia in search of the world’s largest living tiger shark, Kamakai. But instead, they wind up capturing the behavior of juvenile tiger sharks on film for the first time ever, leading to a discovery for shark science. It’s unbelievable to see all this play out and think about how what we’re seeing for the first time will contribute to learning more about this species in the long run. I also really enjoyed Most Wanted Sharks, from Painless Productions, in which marine biologist and shark-suit inventor Jeremiah Sullivan dives into the stories of the most sensational shark stars of all time. And then Shark vs. Surfer, from NHNZ, because it delivers insights about sharks from those who have the closest encounters with them: surfers. They have so much awe and appreciation for the ocean and for sharks, even after many harrowing run-ins. But my ultimate favorite from this summer’s five-week stunt is Raging Bull Shark, also from Red Rock Films, which features some of the most incredible — and aggressive — athletes of our oceans just at a time when climate change is further expanding their territory. I admire them so much because of their fast, agile, efficient hunting skills; their nondiscriminatory diet; their highly specialized biological attributes — they have the greatest bite force; and their exceptional ability to swim in brackish water.

Friday January 15, 2021 The NBA umbrella tips off leaguewide efforts to honor the life and legacy of Dr. Martin Luther King Jr. throughout this weekend as the league, teams, coaches and current and former players engage in the national dialogue on race and equality on our platforms and encourage collective action in […]