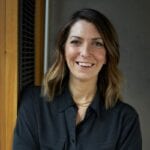 HBO Max unscripted series “12 Dates of Christmas” offers some twists on the dating genre, following three singles on their journey to find someone to bring home for the holidays. Jilly Pearce, EVP of Objective Media Group America and executive producer of the show, offers insights on how producers “shook up the snow globe” to create a unique holiday offering.
What makes this dating series different than others?
“12 Dates of Christmas” is an original take on the dating genre. It leans into movie references, and the cheeky, beloved tropes of rom coms. We knew HBO Max were the perfect partners for the show because they understood we wanted to produce something cinematic, feel good, and romantic, but with a knowing wink to the audience. We embraced the humor of “meet cutes” and a European castle full of magical surprises. We’ve created a picture perfect “snow globe” setting for our cast, but with Natasha Rothwell’s comic narration, we’re not afraid to shake the snow globe and have some fun along the way.
There’s also a real camaraderie rather than an emphasis on conflict – it’s an inclusive cast who go on a journey together, making friendships as well as romantic connections – they bond, they flirt, they find themselves in love triangles, and they fall in love.
How was it created?
The concept was created by Objective Media Group America’s VP of Development Michael Beilinson, who is a huge fan of rom 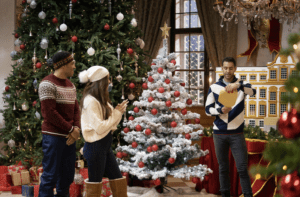 coms and Christmas movies. We wanted to create a real life rom com for the holiday season that was inclusive, formatting the show specifically so that we were able to tell straight and LGBTQ+ love stories side by side. We leant on the tropes of rom coms, casting three leads, who date their love interests over the course of 12 magical dates. Our three leads are looking for someone special to take home for the holidays, and ultimately to carry their relationship into the new year and, we hope, live merrily ever after! We were lucky enough to bring on our showrunner Sam Dean, fresh from the experience of making Love Is Blind. With her unique take on relationships and dating, she took our vision for the show and brought it to life.
What challenges did the location pose?
We wanted to create a unique “snow globe” for our cast, and found a beautiful castle in Austria as our location. It was romantic and magical, and brought a sense of wonder to the show. The greatest challenges were the scale of the castle, and because we wanted to create a winter wonderland, praying for snow days as you can’t control the weather!
The first three episodes of the eight-part series dropped on Thanksgiving. Three more episodes will launch on December 3, and the final two episodes will be available on HBO Max on December 10.
Related Topics:

Friday January 15, 2021 The NBA umbrella tips off leaguewide efforts to honor the life and legacy of Dr. Martin Luther King Jr. throughout this weekend as the league, teams, coaches and current and former players engage in the national dialogue on race and equality on our platforms and encourage collective action in […]