The 1970s was a time of massive change in America, an upheaval that was represented on TV. Former network TV exec  Jim McKairnes has written a book, All in the Decade: 70 Things About 70s TV That Turned Ten Years Into a Revolution, recounting a raucous ten years in the life of television. An excerpt is below. 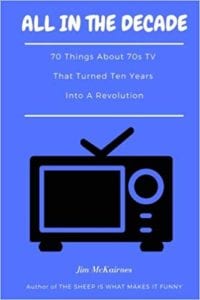 At some point between Watergate and The Love Canal, between Nixon and Carter, between Vietnam and Afghanistan, between the Hurricane Creek Mine Disaster and the Riverfront Coliseum Stampede, between Martha Mitchell and Margaret Thatcher, between POWs and Americans Held Hostage, between Robert Altman and Steve Martin, between The Supremes and The Ramones, between Helen Reddy and Blondie, between Joe Namath and Pete Rose, between Burger Chef and The Happy Meal … the 1970s happened. And TV tried to keep up.

It began on January 1 1970 when Family Affair’s teenaged Cissy stayed out all night after high-school graduation, and it ended on December 31 1979 with burnt-out drug-using Johnny Fever talking to God on WKRP in Cincinnati.

It began with three broadcast networks routinely corralling 90% of all TV watchers, and it ended with TBS, HBO, Showtime, ESPN, PBS and something new called the VCR corralling the networks in turn, cutting in to their action, upping the antes and changing the game.

It began with it roots still in the radio business that spawned it, and it ended with the branches and limbs of premium cable, pay-per-view, and first-run syndication overtaking it.

It began with the economic power connected to it still comfortably held in the executive boardroom; it ended with part of that power now ceded to the viewer’s living-room.

An art form and communications medium had become big business, doing what General David Sarnoff had predicted it would do when he officially unveiled it in 1939 at the New York World’s Fair — change the world. But what was coming clear was that the change was beyond what he or anyone could have imagined.

The 1970s saw the start of more and more of those involved in television heeding calls to do more with it. Part of the first generation to be raised on it, they were also witnesses to real-life tumults that were their 1950s childhoods and their 1960s awakenings. They began to wonder, to hope, to see, how one could connect to the other. They envisioned that TV could make a difference outside of the screen.

“Most television producers are more concerned with creating profitable television programs than with creating groundbreaking television; however, some producers, either by accident or design, create television shows that become part of our cultural legacy,” writes David S. Silverman in You Can’t Air That: Four Cases of Controversy and Censorship in American Television Programming. Those some came from that mix.

So much change. TV had to change with it.

Maybe TV could change for it.

TV now for everyone; TV now about everything.

“I’ve never heard that anybody conducted his or her life differently after seeing an episode of All in the Family,” writes Norman Lear in his memoir Even This I Get to Experience. “If two thousand years of Judao-Christian ethic hadn’t eradicated bigotry and intolerance, I didn’t think a half-hour sitcom was going to do it. Still, as my grandfather was fond of saying – and as physicists confirm – when you throw a pebble in a lake the water rises. It’s far too infinitesimal a rise for our eyes to register, so all we can see is the ripple. People still say to me, ‘We watched Archie as a family and I’ll never forget the discussions we had after the show.’ And so that was the ripple of All in the Family. Families talked.”

That was also the ripple of the decade. People watched. And talked. And times changed.

On television, the form as well as the content changed. “One of the first precursors to this eventual evolution,” observed Michelle Donnelly in her 2015 scriptlab.com essay “The Evolution of American Television Storytelling,” was The Mary Tyler Moore Show: “While following an episodic format, the show was unique in that it allowed for story arcs that saw its characters change over time and which highlighted these characters in more realistic and complex relationships. Likewise, the show M*A*S*H created deep character enrichment through the building of interpersonal relationships while it also provided searing social commentary. No longer just content with portraying situations and relationships predicated on laughs, these writers expanded beyond sketch comedy to develop intricate stories between complex characters.”

Between the two, both the what and how of storytelling started to change; a template was starting to form that revealed a sort of a palimpsest beneath all content, both comedic and drama.

Did the 1970s affect television? Or did the televised content of prime-time in the decade change the country? The people and projects and precedents described in this book suggest that the answer is yes.

The social revolution of the 1970s, all that was in the decade, was televised. TV, it seems, served as both its conduit and facilitator.

In a 1995 speech at an industry gathering in Las Vegas, Lear said, “Television gets the rap for so many problems if only because it is so obvious, so ubiquitous. The big question is how did we get here and what are we going to do about it?”

Decades on, the question holds.

The Cynsiders column is a platform for industry leaders to reach out to colleagues, followers, and the public at large. In their own words and in targeted Q&As, columnists address breaking news, issues of the day, and the larger changes going on in the ever-evolving world of television, video and digital. Cynsiders columns live on Cynopsis’ main page and are promoted across all daily newsletters. We welcome readers’ comments, queries, and column ideas at [email protected]