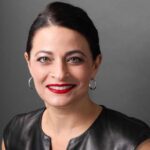 Santa Rosa, 55 miles north of San Francisco, is the largest city in the golden state’s Wine Country and the county seat of Sonoma County. Less well-known but far more significantly, Santa Rosa also is the birthplace of what became Women’s History Month.

The trailblazing women we celebrate every March began as Women’s History Week, created, and run by The Education Task Force of the Sonoma County Commission on the Status of Women in 1978. Two years later, it was made a month of national recognition by presidential proclamation, paving the way for the first Women’s History Month in 1982.

So, March would be special for me in any case but it’s also intensely personal because one of the women I think of for Women’s History Month every year is family. My mother went from being a hairdresser to getting her college degree and becoming the CFO of a company in Silicon Valley. She is my role model and the root cause of why I care about equality, as I watched her navigate her career and home life.  Equality has been a theme that has resonated throughout my life.

I saw this firsthand when, in response to the murder of George Floyd, we began what become a series of workshops and courageous conversations for the 75 staffers in our marketing team. We laid a baseline about what racism means in facilitated workshops and then held conversations to understand how our African American teammates experienced it. We also held conversations when the AAPI community experiences increased hate crimes and one about LGBTQ issues during Pride month. We were nervous because we worried that the meetings would descend into political bickering. The exact opposite happened. Allowing our team to express their lived experiences really helped our culture by creating psychological safety and reinforcing that people can bring their full authentic self to work. We believe a psychologically safe environment means people will be more willing to take risks and push for innovation at work. For myself, I had eye-opening conversations about race and equality that I never had before in my whole career.

Delivering gender equality requires the same honesty.  You must understand how women and girls are portrayed in the media and entertainment and apply those nuances to how you create the work, the work itself, and the environment it runs in. These efforts must be tightly aligned with your team vision, which in our case is sparking brand love by letting people know what they can do with our technology. We can’t do that if we don’t exhibit inclusion, diversity, and representation.

So, when we create the work with our agency partners, we measure our creative through GEMR and we ensure that women are represented in front of and behind the camera. We make sure young diverse people are involved so they get experience and we can better produce bias-free work. We use tools like SeeHer workshops to unlock creative blind spots and train our teams to do the same. It doesn’t matter where on this journey you may be. Just start somewhere.

This month would be good.

In her 20-year career, marketing and operations executive Julie Keshmiry has overseen national and multi-national marketing programs and operations for Intel, Microsoft, Schwab, Amazon, Apple, and Oracle. She is a recognized leader in the industry and was awarded a Cannes Gold Media Lion for Use of Technology in the 2018 Winter Olympics.