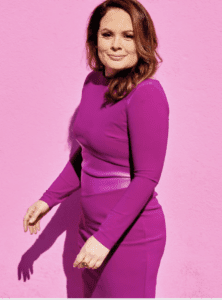 Jessica Rodriguez joined Univision as a graduate intern twenty years ago and worked her way up through the ranks to her current role as Chief Brand and Impact Officer, championing diversity, equity, and inclusion both internally and for the industry at large. As brand steward of the media powerhouse, she has spearheaded some of the network’s most high-profile, award-winning campaigns and initiatives that highlight Univision’s commitment to serving the Hispanic community, and that promote the important role Hispanic culture and Spanish-language play in America today.

Until her recent promotion Jessica also served as President of Entertainment for Univision’s networks, shepherding a new era of content for the company that positions Univision’s family of networks as the fastest growing in primetime in the 2020/21 broadcast season.

She sat down with SeeHer recently to talk about the industry’s progress in fostering an inclusive and representative media world.

As a first-generation Latina growing up in the Bronx with a passion for television from a young age, I was always keenly aware that there weren’t many people who looked or spoke like me on-air. The one place where I did see myself reflected was Univision; it was one of the few outlets where I felt that my family’s experience was truly reflected, and we were seen. Even back then, I aspired to be part of Univision one day, and I truly view it as a privilege to now be in a position to drive change for my community in our industry.

It’s a distinct honor to say that over the last two decades I’ve been able to play a role in championing our community on a broad scale and to work with partners across media and advertising committed to doing the same. I’m proud of the progress that’s been made; that today there is more of our community and its many intersectional identities represented in film, TV and advertising than ever before… but we still have a long way to go.

It’s not enough to add a token person of color to your creative and call it inclusion… it’s not enough to launch a Hispanic Heritage Month campaign and move on, on October 16th. The commitment to diversity must be present at every level of every organization, 365 days a year. It must show up in creative, in marketing strategies and media plans, in productions and in hiring, both in front of and behind the camera. It must be at the forefront of every decision we make in our companies. Not only because it’s the right thing to do, but because, frankly, it’s good for business – and any brand or media company that doesn’t see and act on this will be left behind.

Over the last two decades, each Census report has shown the same trend: Hispanics are driving outsized population growth and having more and more impact on our economy, politics, and popular culture. In the most recent Census, we saw that half of all population growth in the last 10 years was comprised of Hispanics in this country – pushing us to 20% of the total population. And yet, advertising spending to our community is nowhere near parity with that number, and in categories that can make meaningful impact on people’s health and wellbeing, like pharma, healthcare and insurance, the numbers are in the low single digits. We must all push the industry forward to act on the imperative that is marketing equity.

At the end of the day, brand communications and representation can change people’s lives for the better – I can attest to that from personal experience. I hope at this inflection point for our industry, brands and creators alike can see the impact they can have in communicating with, reflecting, and celebrating the 31 million Hispanic women in this country.

I am blessed to have been able to make this my life’s work, and I feel deeply the responsibility to ensure that our community is represented from the screen to the boardroom. For anyone looking to find better ways to access and address our audience, our community, I applaud you and will champion that progress with you.

The mission of SeeHer is to accurately portray all women and girls in marketing, advertising, media, and entertainment, so they see themselves as they truly are and in all their potential.

Wednesday December 1, 2021 Thanksgiving sports might be perpetually linked to the NFL, but FOX Sports reports that its carriage of the MLS game between Portland and Colorado during the holiday scored as the most-watched MLS match on English-language TV since 2004. The contest averaged 1.85 million viewers for the post-season playoff to […]