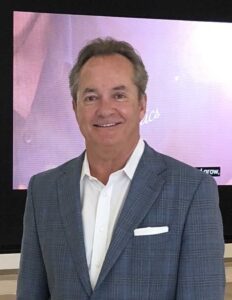 In 2019, SeeHer launched the SeeHer in Sports initiative to increase the visibility, distribution, and portrayal of women and girls in sports. A critical partner in that launch was AT&T, one of the first SeeHer members to use the Gender Equality Measure® (GEM®) and a tireless and proactive supporter of women’s sports.

Under veteran media services executive Mark Wright, AT&T has added several high-profile women’s sports sponsorships to a blue-chip list that includes AT&T Stadium, NCAA, AT&T Pebble Beach Pro-Am, and the Masters. We sat down with Wright, named one of the “Most Influential Executives in Sports” by Sports Business Journal and an Advertising Age “Media Maven,” to gain some perspective and insights into how marketers can most effectively support women’s sports.

As a father, husband, and colleague to several amazing women, nobody has to tell me that brands elevate their work, maximize their media dollars, and make a lasting impact on society by standing in support of women’s sports. AT&T has the resources to help, and we are.

We have one of the best sports sponsorships and media portfolios there is, and we’ve tapped into the passions of those fans to help grow our business for years. It makes sense that we lean into women’s sports and apply the key learnings from GEM® and advertising to the sports world.

We’ve been investing in women’s sports in a big way through our sponsorships of the US Women’s National Team and the WNBA, and individual athlete partnerships with LPGA star Maria Fassi, WNBA star and ESPN talk show host Chiney Ogwumike, and women’s sports advocates Alex Morgan, Sue Bird, and Coach Becky Hammon of the WNBA.

One way we highlight those stories is through our advertising, and a branded content series called “She’s Connected by AT&T,” where we provide mentorship and AT&T services to multi-hyphenate women and hand them the mic to tell their inspirational stories.

In 2020, when live sports were paused due to the pandemic, we worked with ESPN and ABC to move the WNBA draft to ESPN’s flagship channel instead of ESPN2 or another channel. It ended up being the highest-rated draft in 16 years.

AT&T was also chosen as one of only three sponsors considered inaugural WNBA Changemakers, a collective of values-driven businesses which lead the way in the advancement of women and sports.

We’ve focused on improving representation across our portfolio, including growing platforms such as gaming and esports, which are also disproportionately led by men. We launched a program called Unlocked Games that gives female game developers the opportunity to showcase their creative talents.

It’s building programs like She’s Connected and Unlocked Games that ensure women have the access to the opportunities, platforms, microphones, and support they need to be seen and heard. And from Little League to the major leagues, men and boys are showing up and cheering for their female peers.

With my SeeHer in Sports co-chair, Julie Yufe of AB InBev, we’ve developed a scorecard that will help set the baseline for the industry so that media companies, teams, leagues, and other brands can start to set real achievable goals for the industry to improve. We encourage our other SeeHer members to use the scorecard. It’s a great way to stay on strategy and hold each other accountable for progress.

I’m lucky to work at a brand that values equality and inclusion. It brings a level of motivation and inspiration to what we do because we know that not only are we doing right by the business, we’re also inspiring people, and driving positive change. It’s a whole new ballgame, and that’s good for everybody.