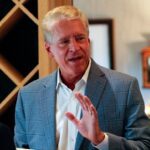 No matter how important the business issues and struggles you’re facing, you have to take a step back and put them in a broader perspective, advises Rick Allen, CEO and co-founder of streaming tech company ViewLift – and former White House Deputy Assistant to President Bill Clinton. Allen explains how his political experience led to being a SaaS CEO.
How did you make the transition from White House to streaming OTT?
My shift from the White House to the streaming world hasn’t been the typical entrepreneurial path. I began my career as a practicing lawyer in Los Angeles, which led me to a conglomerate group of companies involved in real estate, fashion, technology and more, where I served as CEO. During my time as CEO, I was very involved in California’s political scene, along with national politics. It was the easiest way to strike up a conversation with me – discussing voter turnout or how the media told a particular political story.
Through friendly conversations and intentional networking, I was able to build my network before I was ever working in the media business landscape. It rings true in every industry and sector, but every opportunity is through who you know and your network. My past political involvement, my leadership experience and my network all led to the opportunity to serve in the White House as a member of President Clinton’s senior staff, which I did for the first three years of his first term. I was tasked with helping to create AmeriCorps and the government corporation responsible for all federal domestic service programs. I was also Deputy Director of the White House Office of National Service. I assisted with speechwriting for the President and Vice President; and represented the Administration in the media and as a public speaker.
After my time at the White House, I pursued my second passion in media. I was at the Discovery Channel to help extend the brand beyond TV, specifically including new digital platforms and businesses. I then went to National Geographic to run ten of its operating units, launching the National Geographic Channel, one of the fastest-growing cable channels in history.
All of these digital experiences led naturally into forming SnagFilms with Ted Leonsis. Our initial service was geared towards consumers, and the technology stack we created led to a shifted B2B focus which became ViewLift. ViewLift is an end-to-end on-demand and live streaming technology platform, working with entertainment companies, sports teams and leagues, and many other content creators who want to monetize and distribute through OTT media.
What are the biggest similarities between the two? How did your role in the White House prepare you to lead an OTT SaaS company?
I’ve been managing fast-paced industries and leveraging stakeholder buy-in daily, in both politics and streaming. Of course, at the White House, the stakeholders were much broader and expansive – the American people. At ViewLift, my stakeholders are the employees, customers and investors. While the political sector is fast-paced in its own way, streaming and entertainment is constantly on the cutting edge of what technology enables, and what the consumer requires. And the surrounding business environment is equally fast-paced. Competitors and clients both face enormous pressures to consolidate; rights deals shift constantly; public attention is always being diverted in new directions; and what was technically impossible yesterday may become table-stakes tomorrow. Both sectors also move culture in ways that make our lives more enjoyable and worthwhile.
That brings me to the main point, no matter how important the business issues and struggles you’re facing, you have to take a step back and put them in a broader perspective. We are just blips on this earth with different purposes. Take a step back and enjoy it.
What advice would you give to those early in their streaming careers and OTT industry-veterans?
For those early in your career, network. There is a ton of cold calling involved to meet the right people to help guide you. Don’t be nervous about looking foolish. Take that risk to push yourself to do great things.
For OTT industry veterans, it’s clear that content owners’ needs, consumers’ expectations and technology’s capabilities will continue to evolve. That means each of us will have to do so as well. The broader your sources for expertise and opinion, the better will be your decision making.
Life is about Venn diagrams, and everything’s not going to sit in the middle. You have to build those large circles around your passions and things you’re open to. Build the connections to the center circle and streamline those goals and desires into a reality.
Related Topics:

Tuesday January 25, 2022 Today’s Premieres HBO: Real Sports with Bryant Gumbel at 10p Netflix: Neymar: The Perfect Chaos; Alda Twist, Scientist Vice: In My Own World at 10p Today’s Finale Fox: Our Kind of People at 9p IN THE NEWS NBCUniversal and TikTok inked a “massive” new agreement to bring new content and ad […]