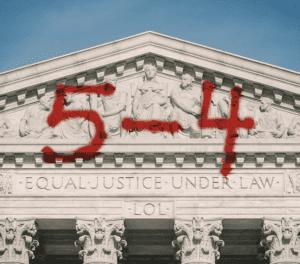 5-4, offering “an irreverent take on the U.S. Supreme Court’s past,” has arrived from Westwood One and Slow Burn co-creator and host of the Fiasco podcast Leon Neyfakh’s Prologue Projects. Each episode focuses on a pivotal case in which the Justices make one of the most important decisions in recent memory, dissecting it from every angle. (5-4 is already charting in the Top 10 on the Apple Podcasts Government chart.

The first episode  tackles Bush v. Gore; future episodes take on the Supreme Court’s decisions on campaign finance, affirmative action, voting rights, and stop and frisk. Neyfakh and Andrew Parsons, executive producer at Prologue Projects, are producing the show, which will be released weekly. Neyfakh narrates the facts and historical context around the case-of-the-week before handing off the discussion to progressive legal commentators Peter (aka as Twitter’s @The_Law_Boy, Rhiannon (@AywaRhiannon), and Michael (@_FleerUltra).

“I’ll be honest, I’ve been nervous to play 5-4 for my mom because I think she’ll be mad at me. That said, I feel like once she actually listens to Peter, Rhiannon, and Michael, and hears how smart they are about the law, she’ll see past their belligerence, vulgarity, and total lack of respect for institutions, and perhaps even find them charming,” said Neyfakh. “I know listeners will too, and I don’t just mean the army of followers that Peter — or as I still call him, Law Boy — has amassed on Twitter.”

Friday February 26, 2021 Hennessy has become the NBA’s first global spirits partner. The multi-year agreement expands on the cognac company’s North American deal, which was announced in February 2020. The expanded partnership will tip off in Africa, Asia-Pacific, Europe and South America with the launch of an adaptation of the “Hennessy x […]

A CYNOPSIS MESSAGE FROM A+E NETWORKS   WE HAVE THE PROOF BREAKING OUT OF TRADITIONAL DEMOS BOOSTS BUSINESS… ADULTS 55+ ARE TWICE AS LIKELY TO RECALL BRANDS AND MESSAGES FROM TV ADS VS. ADULTS 18-34 A+E NETWORKS HAS THE ADVANCED TARGETING TOOLS TO UNLEASH OPTIMAL VALUE FROM YOUR MEDIA BUYS HISTORY | A&E | […]