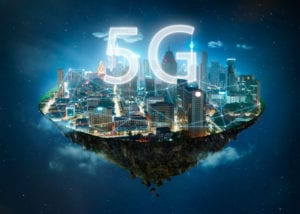 In the last 10 years, the world has undergone a truly transformative, new industrial revolution as the promise of the digital world has expanded into an explosion of fulfillment – and while our economy has added trillions in value, our society has also been inexorably changed, mostly for the better.  The advent of the high speed digital revolution, now largely based in video, apps and sites, has changed how we communicate (more bitmoji and gif than text), what we share (thank you, Kardashians and Housewives), even how we shop, dine, and more.  And while we haven’t fully adapted to this world or how to handle it as a society, that’s nothing compared to what’s next.

Now, the stark reality: The coming world of 5G will make the last 10 years look like child’s play.

5G will create trillions of dollars in economic value while upending everything we know about communications, entertainment, and commerce.  Current Internet providers will find themselves the new Sears, wireless companies like Verizon and AT&T may surpass Amazon in their importance, and the digital divide could become a thing of the past—producing earthquake-worthy socioeconomic changes to society.

So why aren’t consumers talking about it?

Well, 5G has a branding problem: because it is a technology and not a brand, no one is in charge of explaining it to the public in a simple, emotionally valuable way.  Think about if someone tried to explain the Internet to you in 1994.  It’s not easy to describe something totally new.  So while Tide can make your whites whiter and Pixar helped us all understand the value of CG animation, those were brands advancing technologies.  The companies creating 5G are still facing the challenge of how to do the same for their tech in a simple way that mass consumers will care about and understand.

Here’s the (oversimplified) explanation: Telecom’s 2G gave us text-based communication; 3G gave us pictures; and 4G LTE gave us the video and app world we know today.  However, most people don’t know that, and think that each was just a slightly better iteration of the last.  So they generally believe 5G is just the next “version” of 4G, which is simply not true.  The press isn’t helping, either: describing 5G just as “faster” than 4G (https://venturebeat.com/2018/09/28/why-is-verizon-chasing-4g-speed-records-with-5g-only-days-away/) is like comparing a sharp rock to a Swiss army knife.  They can both cut things, but one is quite different from the other.

Picture a world where electricity flows through the air like wind, and you never need an electric company or even a wire to plug in anything, ever.  It’s all just “on.”  That’s the potential of 5G, only for the Internet.  Potentially as much as 100 times faster than 4G (https://www.business-standard.com/article/international/100-times-faster-than-4g-wicked-fast-5g-debuts-at-2018-winter-olympics-118021300286_1.html) and provided by your wireless “phone” company, you will no longer need a separate home internet provider.  You will no longer need a cable or satellite company to stream TV or movies.  Your connected home, car, entertainment and life will be able to operate seamlessly no matter where you are, without worrying about wires, coverage, speed, access, or any limitations. Startups we can’t even foresee will dwarf the impact of YouTube and Uber.  Within the next 10 years, as Verizon, AT&T, and T-Mobile race to construct “5G cities” across this country, your “cell phone” company is going to be so much more than that, as they provide an unprecedented Internet signal you can tap into for anything, anywhere, on steroids.

To understand the impact, let’s break it down for just one product category.  Netflix has shifted how we think about entertainment content in revolutionary ways, with an over 55 million US homes in their corner .  But pay TV has almost twice that, at more than 90 million, and 5G will upend every single one of them by giving users a high speed option to access whatever content they want in home.  Imagine a technology coming along that has twice the impact of Netflix.  And that’s just in TV.  The same will hold true for XR (another industry with a branding problem), eCommerce, gaming, auto, electronics, and more.  The impact of YouTube will be replicated over and over in every area of industry.

To say the change in speed will be transformative is to ignore the impact of speed in moving from still photos to creating the entire multi-billion dollar video economy.  5G will herald the saturation of real-time immersive content, the balloon of AR and mobile-based VR, and the ability for web pages to host so much content that it oblivates the need for any company to create a separate app (https://www.forbes.com/sites/danielnewman/2018/03/27/4-reasons-5g-is-critical-for-mass-adoption-of-ar-and-vr/#4583d5451878).

But speed isn’t the only benefit of 5G.  The hidden benefit is accessibility.  For the first time in history, with America blanketed in 5G the way it is currently by 4G LTE, every American may be able to have affordable access to high speed Internet, without having to find a separate provider.  Even MVNO carriers that borrow the networks of America’s leaders will provide low-income Americans with new opportunities.  This means we can eliminate the digital divide, making the Internet a truly democratic institution.

Whether we call it “Wi-Fi for All” in a nod to the compelling branding proposition universal healthcare advocates finally found, or “Permanent Wi-Fi” or yes, just 5G, the industry has an obligation to help the American public understand, process, and prepare for this next evolution of society.  The digital video world of 4G came fast and furious, and we’re still struggling to adapt; that doesn’t have to be the case here.  A collective, compelling brand that provides a shorthand understanding of this transformative technology’s impact will help not only consumers, but help every small and large business understand and process how to adapt this major cultural change.

The Cynsiders column is a platform for industry leaders to reach out to colleagues, followers, and the public at large. In their own words and in targeted Q&As, columnists address breaking news, issues of the day, and the larger changes going on in the ever-evolving world of television, video and digital. Cynsiders columns live on Cynopsis’ main page and are promoted across all daily newsletters. We welcome readers’ comments, queries, and column ideas at [email protected]