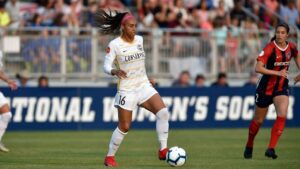 A Southern California native and former USC standout, Samantha Johnson is paying it forward by creating programs to enhance the educational experience of alternative learning students. She hopes to leverage her career and platform as a professional athlete to support the next generation of girls in the global game. We sat down with the star defender to talk about her story, representation in the game, and the Olympic gold medalist who was Johnson’s inspiration from a young age.

Soccer is the number one sport in the world for everyone. They play barefoot in the street and it’s fine. But we don’t get that image of the game in America. You don’t often see soccer being played by girls in African American communities. I was the first person in my family to play soccer and invest a lot of time doing it. My parents did not understand the game but saw how happy it made me. Funnily enough, I do not even think they knew I was even that good until the outside recognition started rolling in and I was being offered full rides to major schools in the country.

For me, “if you can see her, you can be her” is true because my career pathway became believable to me when I first saw Shannon Boxx. She is a multiracial woman and looks like me. I identified with her simply because she was doing what I wanted to do — be a professional player — and we played the same position at the time.

Her image made me believe it was possible, which convinced me “I can do this.” That’s all I needed. I pretty much took it upon myself to become what I wanted to be and there was no excuse why I could not work to achieve it. I saw it was possible when I saw Shannon Boxx. Ironically, when I turned pro, I became her teammate on the Chicago Red Stars. I did my best to “play it cool” but it was so surreal.

Sometimes we cannot fully believe in ourselves because we have not identified someone who is currently in the position we want to be in. That lack of belief could hinder your motivation and inspiration to fearlessly attack your dreams. Coaches would look at me and weren’t sure what I was capable of until I got on the field. Once I earned my opportunity to get on the pitch, I never left. I have never been someone’s first choice, but always the right choice.

There is a lot of conversation about the impact of women’s sports, but I can only work on what I can control, which is how I interact with the world. I put a lot of time and effort into my craft as a player and a person. Those two things must align for me. I am the same person/player on and off the pitch. I make aggressive mistakes, I am a good teammate/friend, but need to be told to reel it in at times (yellow and red cards).

Representation is crucial to believing you can overcome adversity and pursue your dreams through adverse times. For this generation coming up, it’s critical to understand that even in the pros you must continue to do the work. I don’t care how many people look like you, have a lot of social media followers, or say you are a good player. Becoming a pro in any industry takes a million hours of dedication to becoming excellent in your craft, but more importantly, becoming an excellent person. That balance is everything, because you never know: you could give the next girl her “Shannon Boxx” moment, and the rest will be history.

When I was at USC, an African American man and his daughter were watching our team train one day. During a water break, he kindly got my attention through the fence to ask me a question: “Are you on the team?” he asked.

He persisted with his question. “You’re actually on the team, the USC Soccer team?”

I hesitated but smiled and answered while laughing, “Yeah, I am.”

He looked at his little girl and said, “See? You can do it too!”