Where do reality TV producers find talent? How scripted is “unscripted” TV? And how is the genre evolving? Ping Pong Productions Co-CEO’s Brad Kuhlman and Casey Brumels offer insights on the current state of the industry. Their newest series, Expedition X, hosted by adventurer Josh Gates, debuts Wednesday, February 12 on Discovery.

Where is the most unusual place you’ve discovered reality show talent?

BK:  The fact is… good talent is everywhere.  The world is full of engaging people who, given the chance, would pop on television. Of course, the trick is being able to craft a sticky concept AND find appealing talent who embody that specific world. Often concept outshines talent or vice versa, creating a roadblock to your green light. But when talent and concept are both highly appealing, well, that’s what we’re all looking for.  I’ll never forget when we were casting Finding Bigfoot for Animal Planet, and we caught our first glimpse of James “Bobo” Fay on a casting tape among 30 other Bigfoot enthusiasts.  He was this laid-back surfer from Humboldt County in Northern California who was the size of Bigfoot with a uniqueness that is all his own.  He was an instant reality star, lending his enthusiasm and expertise to more than 100 episodes we produced for Animal Planet, despite never actually finding a single Bigfoot 🙂

Do you have guidelines for how much guidance is given in plotting unscripted shows? 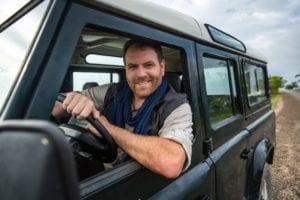 BK:  Every show we do is different, but they all require a certain level of plotting.  Our show Expedition Unknown on Discovery demands an incredible amount of research and planning to ensure we are able to deliver an ambitious expedition each week.  The logistics and narrative of that series are tightly produced well in advance, yet we allow plenty of room for REAL discoveries to be made by our host, Josh Gates, in the field.  When that happens, as it often does, we throw the plan out the window and go where the story leads.

CB: Dr. Pimple Popper however is very different.  With each of our patients we are tracking a complex medical process that has life-altering stakes.  Each story unfolds in its own unique way in a more traditional documentary manner and our job is to capture the events as they unfold in front of us and craft the story after the fact.

How is the business of reality TV production evolving?

CB: Over the almost 15 years we have been in business I think the biggest evolution we continue to see is the fragmentation and narrowing mandates of networks. At one time you could take out an idea which may have been right for 4-5 networks giving you a much better chance of finding it a home. With the exception of the streamers, many networks today have become so specialized and narrow in on what they are looking for that it makes our jobs as production companies increasingly harder to pitch something that they have not heard before.  This coupled with ever increasing options for the viewers who are watching linear television makes developing a breakout hit like Dr. Pimple Popper or Expedition Unknown more and more difficult to find.