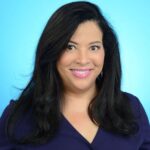 Diversity and inclusion have always been hallmarks of The Hershey Company’s culture. The snack maker’s commitment to a society without bias is broad and deep, and it has been in the forefront of efforts to drive equity in its workplace and communities. Hershey has created Business Resource Groups (BRGs) to open dialogue with its employees and create new mechanisms to achieve equality. In 2020, Hershey achieved aggregate gender pay equity for salaried employees in the U.S., and last year, it reached the same milestone in aggregate pay equity for people of color.

The company has gone all in on Pride Month, working with its LGBTQ BRG, called Prism, to celebrate the community in a number of ways. In 2020, it flew the rainbow flag for the first time over its Pennsylvania headquarters and decked out its iconic factory smokestacks in rainbow colors. Both efforts were repeated this year as well. For this week’s blog, we sat down with Hershey’s Chief Diversity Officer Alicia Petross to learn how the company has achieved sustained success in its diversity and inclusion efforts.

Diversity is a business imperative for Hershey. We believe that corporations have a responsibility to visibly live and demonstrate their values, so we look at this work as underpinning our values. Without inclusion, we cannot be what we always aspire to be.

We created our first BRG, to commemorate Black Heritage Month, 30 years ago. We’ve had a woman on our board since the 1970s (there are five now). Our global workforce is 47.7 percent women. Michele Buck, who was named our president and CEO in 2017, was previously chief marketing officer. She has really made inclusion a mandate.

The pandemic and social issues demanded more of us, and we knew what needed to be done. We asked ourselves: What legacy did our people want Hershey to have, and how could we create change? It led us to focus our resources within the organization to advance equity (such as unconscious bias training twice a year).

And diversity has been embedded in our business operations and communication plans, like our participation in Black Out Tuesday on Facebook. We never took a public stand like that before.

We had such a sense of pride in lighting the smoke stacks in rainbow colors on June 1. It was a clear and definite proof point. This year we also added food trucks and invited families of employees and people we work with at the central Pennsylvania LGBTQ Center.

Here is the key in creating a workplace and culture of belonging: It doesn’t matter where you are in the journey. What’s critical is to be focused and intentional. We talk with our BRGs frequently and discuss outcomes every quarter. You can’t ask people to make a difference without allowing them to give input on solutions and outcomes they would like to see.

It is critical for organizations to live their commitment and visibly demonstrate it. I am an optimist and I believe everyone has something meaningful to bring to the table. It’s also a lot more fun to work in an inclusive environment.

Good for business too.