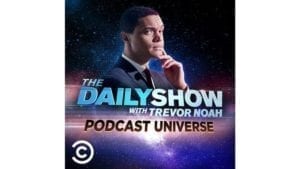 “The Daily Show Podcast Universe further reinforces the fact that The Daily Show with Trevor Noah is a late-night leader in podcasting,” said Steve Raizes, SVP of Podcasting for Viacom. “The series continues to break new ground across platforms and offers fans truly unique ways to interact with the show, Trevor and the correspondents.”

In February 2018, The Daily Show launched podcast, The Daily Show with Trevor Noah: Ears Edition, which has delivered over 100 million lifetime downloads to date and is the most-downloaded podcast among the late-night TV franchises.