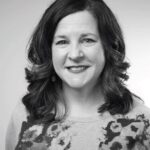 Every woman’s story is unique.  A common theme is most of us have experienced the effects of inequality.  In that effort, Procter & Gamble is a tireless advocate to build a better world for all of us – a world free from gender bias.

The world’s largest advertiser is a founding member of the SeeHer movement and its Chief Brand Officer Marc Pritchard, is SeeHer Co-Chair. He is joined by an army of female P&G staffers, among them veteran marketer Susan Cavanaugh, North America Group Media Director, who has been a champion for change for over 20 years.  In this week’s blog, she shares her story and offers an insider’s perspective on the movement in commemoration of Mother’s Day 2022.

When we think of powerful women that are champions to end inequality, we normally think of CEOs or high-level executives. For me, the first woman who taught me that I was equal was a homemaker – my mother.

Her approach to her role was anything but typical. Even though she was full-time mom, she showed us that she was still important.  She was not going to be invisible. Her aspirations were just as important as my dad and ours. So, at age 50, my mom decided she was going to get her GED, better yet she was going to go to college. Sounds great, right, well not so much when your mom is trying to fix you up on dates with her college friends!

My mom is a role model to just be yourself and go for it. She gave me that power. In college, I was looking for a job, but all the ones left were designed “male only”. Because I saw my mother take on her challenges, I was confident to make my case. The job was tennis manager which including doing laundry.  Seriously, I had a side hustle laundry business, so I went in, and I got the job – thanks mom!

The greatest gift that my mother has given me is confidence.  She helped me believe I could achieve success, but better yet, I deserved it. I have fewer doubts about what I can achieve than my mother had. I am hopeful that my 3 daughters and 2 granddaughters will have even more confidence than me. If they have challenges, I hope they are inspired by my mom and me to be persistent and passionate.

As I reflect on my own role as a mother and as co-chair to the SeeHer Media Taskforce, I know my role is to create the opportunities and nurture not just my own children, but my colleagues and future generations. They need to see me making the change, so they can be me making the change someday. Luckily, I had the best role model to inspire me to make a difference.

My advice for all the wonderful women reading this article – and their supportive male colleagues – is look at gender equality as an opportunity, not a challenge and be sure to follow all the great work of SeeHer!