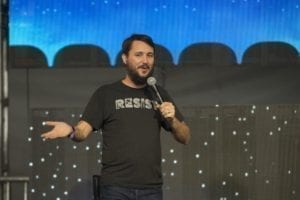 A new esports reality show, GameMaster, is set to debut on a streaming service in spring 2020. Wil Wheaton will serve as the Commissioner/Host on the nine-parter, with 12 amateur esports contestants living together and competing in a house as their actions are broadcast on platforms around the globe.

Produced by Georgia-based Peach Maria Productions and will powered by AMD, “GameMaster takes the love of gaming and elevates it to a whole new level through the first immersive, multi-platform, head-to-head competition for both casual and diehard gaming fans,” said show creator and executive producer John Colp. “Our players won’t play the same game from noon to night. They will play different games throughout and, at the end, the person who has the best cumulative score will be crowned the champion.”

A Cynopsis Message From HALLMARK CHANNEL Hallmark Channel’s Countdown to Christmas Begins TODAY! The Beloved Annual Event Is a Pop-Culture Phenomenon & Cable’s #1 Rated Event   We’re Bigger Than Ever With 40 All New Original Movie Premieres & a Sleighful of Holiday Cheer Across Two Channels, 24 Hours a Day, 7 Days a […]

Friday October 23, 2020 Game two of the World Series handed FOX Sports properties with 9,263,000 viewers, according to the company, as the Rays evened the series with the Dodgers. FOX alone brought in 8,950,000 viewers, with the game ranking as the most-watched telecast of the night, despite declines in viewership. Game one, meanwhile, […]

Thursday October 22, 2020 Today’s PremieresEstrella TV: Tu Night con Omar ChaparroFacebook Watch: Ask Mama ChantelHBO Max: EqualNick: Unleashed at 7pTV One: Represent the Vote: Our Voice, Our Future at 12p Today’s FinalesID: The Killer Beside Me atScience: What on Earth? at 9p IN THE NEWS Quibi is shutting down. The short-form mobile video […]

Thursday October 22, 2020 Good morning and this is your weekly Esports Brief. Global esports organization Gen.G is getting into the currency biz, announcing a partnership with Rally to create GG Strike Coin and marking the first time an esports organization has announced a digital currency. Launching next month, the new digital […]